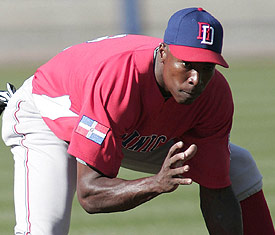 How oh how did the Nationals manage to hold on to first place in the NL East for so long last season? How oh how did they manage to end up in last? Well, they over-achieved big time last season, and in the end the NL East was too competitive for a team that was prevented from making solid moves by its 29 owners. The Nationals are now in their second year in D.C., with ownership set to be in place at any moment. The times they are hopefully achangin'.

Schneider actually improved a bit last season, putting up better numbers in fewer games. If he can improve again this season and play more than 116 games, then it will be a solid contribution.

LeCroy is the better offensive player, at this point, but the starting job is Schneider's. Look for LeCroy to get time at catcher and at first base.

I am not totally convinced that there is a whole lot of difference between Nick Johnson and Todd Helton. I would like to see Johnson go play for the Rockies - I would bet that he would put up similar numbers. Nick has struggled through his career with injuries, but when healthy he is an on-base machine with good average and power. If he can stay on the field, look for 25-100 .290/.410/.515 from Nick Johnson this season.

Jose Vidro Well, as of this writing the Alfonso Soriano battle has ended, with Soriano pleasantly taking the field tonight for the Nationals, batting leadoff and playing left. Still, second base remains a question for the Nationals, because Jose Vidro, a fantastic player when healthy, has missed 139 games in the last two seasons, and turns 31 this season. If Vidro is healthy, this is a strong position. If not, there could be more turmoil as Soriano discovers that the Nationals prefer Marlon Anderson at second over him too.

The good news comes in a double dose for the Nationals at third base. First, the Vinny Castilla Era has drawn to a close, which is absolutely fantastic. Second, Ryan Zimmerman was tasty in his 20 game debut, hitting .397 with an OPS over 980. Zimmerman began the 2005 season playing for the University of Virginia, got drafted by the Nationals, and breezed through Single and Double A ball before landing in D.C. Interestingly, after only 7 career collegiate homeruns, he hit 11 in 67 minor league games. In college he was a pure hitter, rarely striking out, but not the type to take a walk, either. In both the minors and his major league stint, he struck out considerably more than he walked, so it will be interesting to see if he can make the adjustment.

At this point, he looks like a George Brett type, a pure hitter who will hit doubles today, and homers tomorrow. If he can play everyday and keep his OPS over 800, he's an easy improvement over Castilla.

The Nationals made one obviously necessary move in getting rid of Castilla. How it is, then, that the Nationals managed to go the entire off-season without finding a replacement for Cristian Guzman, we'll never know. Guzman was simply terrible last season, with a 574 OPS (not slugging, OPS). He had to get white hot to finish the season with a .219 average and exactly 100 hits in 142 games. And, he doesn't field well either.

There are two bright spots for Guzman. First, he still managed to hit 6 triples last season, which simply remarkable considering the season he had. Second, Guzman is still young. He will only be 28 this season, so in theory (and this is WAY in theory) he could actually improve this season.

If he can't hang, it may be Larry Broadway time at short for the Nationals. Cue the "Broadway Show" headlines.

The Nationals sent Brad Wilkerson and several other players to the Rangers for Alfonso Soriano. As I have made clear, I think the Rangers will prove to have gotten the better of the deal, even with the standoff now over, and Wilkerson will have a better season than Soriano. A second rate second baseman in left field doesn't concern me (at he is fast); rather, I am concerned by Soriano's abilities and peripherals in a new, less friendly offensive setting. We'll have to wait and see - maybe he'll go 40/40.

Ryan Church is very exciting. On offense he doesn't bring a ton to the table (70 Ks in 268 ABs), but he seems to be developing his power. His real prowess is on defense, where Church is a highlight reel player. All the things people say about Jim Edmonds may be applicable to Church, but he's still exciting.

Jose Guillen is this team's leader, which tells you a lot about this team. After not being able to find a home for several seasons, Guillen is beloved by the Nationals fans, and gave the home team a lot to cheer for as their poster player. Nevertheless, he still strikes out a ton, never walks, and his power has declined in each of the last two years. Lets hope the stability of playing for the same team two full seasons in a row (something he hasn't done since 1997-98) will allow Guillen to relax and improve on the less impressive aspects of his game.

This is the single most important position for the Washington Nationals this season. The front three starters could be the difference between 85 wins and 65 wins. For the Nationals to be competitive, these three have got to be healthy and consistent. Unfortunately, one of these guys is named Ramon Ortiz.

Patterson and Livan were awesome last season. Livan pitched most of the season battling injuries, and led the league in innings pitched. Patterson was solid all year despite missing early time due to injury, and only at the end of the season did his ERA go over 3.00.

Ortiz, on the other hand, is four years removed from his last even decent season, and was awful in 2005. Granted, he was pitching for the Reds, who pitch from a cursed rubber. Nevertheless, Ortiz has lost his velocity, walks too many, and gives up a ton of dingers. His presence is not a good sign for the Nationals.

Armas, Drese, Astacio. Ironically, Tony Armas Sr. was known for tons of strikeouts and very few walks. Too bad he was a hitter. Its also too bad that Jr. is a pitcher, because we walks a ton, and his strikeout totals are in steady decline. At the age of 28, if Armas can't stay healthy this season for the first time since 2001, his career may be nearly premature end.

Drese had some flashes of brilliance after joining the Nationals as a (get this) waiver wire pickup last season. But in the end, his numbers were pretty much what we have come to expect from him - pretty mediocre.

Pedro Astacio joined the club to take the place of lost for the season Brian Lawrence. The Nats apparently signed Astacio after talks with Phil Niekro fell through. All kidding aside, there were positives to be taken from Pedro's performance last season - he was actually pretty good once he joined the Padres. Seven seasons removed from his last fully productive season, Astacio could find himself in the number three spot on this team if he can stay healthy. .

This is a team with the potential to contend for the NL East title this season. Unfortunately, a few too many factors have to go their way to make that happen. Ryan Zimmerman has to be ready to be a full timer at the age of 21. Cristian Guzman has to rebound to be merely below par. Nick Johnson must stay healthy. Jose Guillen must continue to grow. Ramon Ortiz must keep the ball in the park. The Soriano Experiment must produce results.

This is a team with upside, and for that reason they should finish with a winning record. Unfortunately, that record will probably only be good for third in the division.


Disagree with something? Got something to add? Wanna bring up something totally new? Asher B. Chancey resides in Alexandria, Virginia, and can be reached at asher@baseballevolution.com.