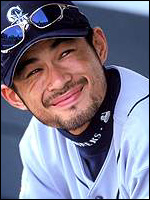 The Seattle Mariners last year, despite reaching into the free agent bag not once but twice for sluggers Adrian Beltre and Richie Sexson, finished in fourth place with a disappointing 69-93 record, 26 games off the pace set by the division winning Angels.

Whether these moves will be enough to help push the Mariners to where they want to be or not can only be determined by the grinding of the 162-game regular season.  We will however, attempt to give you a better guess by examining their roster a little bit closer.

Johjima, an 11-year veteran of the Nippon Professional Baseball league in Japan, signed a 3-year, $16.5 million contract in November to become the first catcher from Japan’s major league to play in the United States.  In Japan, Johjima was a 6-time All-Star, a 7-time Gold Glover and the 2003 League MVP.

He was a .299 career hitter in Japan where he played his entire career with the Fukuoka (later Daiei) Hawks.  Over the last 5 seasons, Johjima hit 150 home runs, including 36 in 2004 at an average of one ever 11.83 at bats.  He is also a good contact hitter, particularly so for a power hitter, having averaged just 43 strikeouts per season in Japan.

He has so far impressed his teammates and coaches in camp with his solid play both at the plate and behind it.  Said pitcher Jaime Moyer, “He knows what to do.  He’s got very good instincts.  And he’s making a great effort to be a leader on the field and to do his job.”

Manager Mike Hargrove added, “He is as advertised.  He is a solid catcher, he has a quick release.  He has an average to above average arm that is accurate, and he’s a very intelligent player.”

Signed by Seattle as a free agent to a long term deal before last year, Sexson went on to lead the team with 39 home runs and 121 RBI and finished second with 99 runs scored.  It was the fifth time in his career that he’s hit 29 or more homers and driven in over 100 in a single season.  He also drew 89 bases on balls to record a .369 OBP, though at the same time, he struck out a whopping 167 times to lead the AL (second in the Majors behind Adam Dunn).

Defensively he logged a solid .995 fielding percentage while leading the AL in assists and finishing fourth in double plays.  He does not possess great range but does make the routine plays.

The Mariners are very high on this 22 year old from Venezuela who hit 18 home runs between Triple-A Tacoma and Seattle in the ’04 season.  Originally signed as a shortstop on a team loaded with young shortstops, Lopez became the team’s starting 2B last September and is slated to hold that job this year as well.  A .294 hitter in four minor league seasons, Lopez hit .247 with 2 Hr’s in 54 games for Seattle last year.  He hit .319 at Tacoma.

He faces competition in camp from veteran Fernando Vina, who is healthy after missing all of last season and most of the previous two with hamstring and knee injuries.  Seattle signed Vina, who will turn 37 in April, to a minor league deal in the off-season.  The Mariners like him for his veteran leadership and his quick hands at 2B.

Yuniesky Betancourt defected from Cuba on a raft in July of 2003 and made his professional debut in 2005 at age 23.  He rose quickly through the Mariners system, pushing aside other talented and prominent shortstop prospects like Lopez, Mike Morse, Adam Jones and Matt Tuiasosopo to become the Mariners shortstop of the future.  Indeed Lopez is now penciled in at 2B, while Morse has been seeing action in camp at 1B, 3B as well as left field, Jones is working out in center and Tuiasosopo’s future may lie at 3B.  Said Manager Mike Hargrove, “When you have a guy like Yuniesky Betancourt, it changes a lot of people’s careers.”

In 2005 Betancourt played in 161 games at three different levels in the Mariners system and totaled 621 at bats.  Beginning first at Double-A San Antonio, he played in 57 games and hit .273 and slugged .410.  Then he moved up to Triple-A Tacoma where in 49 games he hit .295 and slugged .443 before being called up to the big league club where he finished the season as the Mariners starting shortstop, playing in 60 games and hitting .256 while slugging .370.

Mariners infield and third base coach Carlos Guillen, a 13-year Major League veteran, compares Betancourt’s defense to former Mariner shortstop Omar Vizquel.  “Yuniesky is as good as Vizquel, but just different in the way he plays the position.  He does things differently than everybody else.  You don’t teach it, but he does it so well you don’t have to.”

Beltre begins his 9th Major League season, and his second with Seattle, with one major question hanging over him: Was his monster 2004 season a fluke, or will he be able to put the pressure of his big contract aside and become a consistent run producer in the middle of the Mariners lineup?

Was his ’04 season a one year wonder year or an accurate guide to just how much potential Beltre has?  Despite his 8 seasons of experience, Beltre will turn just 27 this April and there remains time for him to reach and maintain the level of potential that has been expected of him for so long.

Ichiro Suzuki is not only the cornerstone of the Mariners outfield, but he is also the face of the franchise.  In 2005 Ichiro became the first player in Major League history to record 200 or more hits in each of his first five seasons, in 2004 setting a Major League record for hits in a season with 262.  In five Major League seasons, the 32-year old Ichiro has 1,130 hits and a .332 career batting average.  Last season he also set career highs in home runs (15), RBI (68) and triples (12).

Defensively he’s also one of the top outfielders in baseball.  His range factor of 2.53 was 10th in the AL among OF’s with at least 100 games played and was tops among all non-centerfielders.  His .995 fielding percentage placed him in a tie for fifth among all AL outfielders.  Additionally he possesses one of the top arms, not only in the game today, but quite possibly in the history of the game.  He has averaged 10 OF assists per year and only a deep respect for his great arm keeps that number as low as it is.

Ibanez spent the majority of his time at DH last season but after the team signed Carl Everett, they announced that Ibanez would be the team’s everyday left fielder.  They then signed him to a two year, $11 million extension.  He has averaged 19.5 home runs and 86 runs batted in over the last four years and is a career .283 hitter.  He won’t win any Gold Gloves, as his .987 lifetime fielding percentage can attest to, but he has registered 25 OF assists the last three years.

The oft troubled switch hitting slugger could help provide some big punch in the middle of the lineup, or he could provide a big distraction in a clubhouse that Ichiro questioned last year.

43 year old Jamie Moyer returns for his 11th season with the Mariners.  He has won 205 games in his 19 year career, 139 of them in a Mariner.  Moyer has been the rock of the Seattle staff for the last 10 years, twice winning 20 games and sporting a 3.93 ERA during that time.

In an attempt to bulk up the rotation this past winter, the Mariners signed former Angels left hander Jarrod Washburn, to a 4-year, $37.5 million deal.  The eight-year vet is 75-57 with a 3.93 ERA lifetime including an 18-6 record with a 3.15 ERA in 2002.  He battled through injuries the next two years but rebounded last year with a 3.20 ERA despite an 8-8 record.

Gil Meche has battled injuries throughout his career, only once topping 30 starts (in 2003 when he won 15 games) and losing the entire 2001 and 2002 seasons to injury.  Labeled as a player with enormous potential, Meche has yet to approach the level expected of him but as he enters his free agent year, he could be primed to break out.  Whether he can stay healthy will be the key to his season.

Over the last 4 seasons, since the man known as “Everyday Eddie” became the closer of the Minnesota Twins, Guardado has saved 140 games (at an 86% success rate) and posted an ERA of 2.83. He rebounded from a slightly torn rotator cuff (he did not require surgery) to save 36 games in 41 chances for the M’s in 2005.  His ERA of 2.72 was a career best.

J.J. Putz and Julio Mateo are the top two setup men in an otherwise inexperienced Mariner bullpen (only Guardado has more than four years of Major League experience).  The trade of Matt Thorton to the White Sox leaves George Sherrill (42.2 innings career) as the senior left handed setup man.  Left hander Jake Woods (a rookie last year with the Angels), Rafael Soriano (just 10.2 Major League innings the last two seasons) and either rookie lefty Luis E. Gonzalez or Jesse Foppert (acquired from San Francisco in the Randy Winn deadline deal) will occupy the final spots in the Mariner pen.  39 year old non-roster invitee Dave Burba, a former Mariner, has an outside shot at making the roster.

While the Mariners have a pretty good mix of veterans and youngsters, the name of the game is pitching, and Seattle just doesn’t have enough.  Sexson, Beltre, Everett, Ibanez and Johjima could provide the team with some punch in the middle of the order while Reed and Ichiro could do an excellent job of setting the table.  But the rotation is suspect, and the bullpen not terribly deep.  If Pineiro and Meche turn it around and they can get one more good year out of Moyer, it’s possible the M’s could compete.  If they don’t, they will be watching once again as the A’s and Angels duke it out for the top of the AL West.