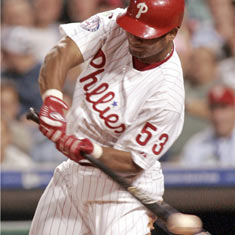 The Philadelphia Phillies are a dynamic young team with good offense at almost every position. The Fielding Bible reveals that the Phillies are also a surprisingly good defensive team - David Bell, Jimmy Rollins, Chase Utley, Ryan Howard, and Aaron Rowand each finished in the Top Five in plus/minus last season! Hitting and defense won't be issues this season for the Phils - the 2006 season will be won or lost by the pitching staff. With Randy Wolf out indefinitely, the Phillies rotation is significantly less deep than it could be, and the season could be over by July if the staff can't hold things together.

As much fun as the Lieber-Lieberthal battery is, the veteran Phillies catcher's best years are behind him. He managed to play only 118 games last season. Expect the same this season, with Sal Fasano, who is actually four months older than Lieberthal, picking up the slack.

It was love at first sight for us with Ryan Howard when we saw him in spring training with the Phillies last season. In just over half a season, Howard hit 22 HR with 63 RBI, 17 doubles, and 52 runs scored plus .288/.356/.567, a solid debut to be sure. The weak spot in Howard's game is his 100 strikeouts in 312 at-bats - no reason to think he can't get 200 strikeouts given a full season of play. Nevertheless, barring a Kevin Maas-esque shutdown, Howard should be around for years.

Fortunately for Chase Utley, the Phillies abandoned their Utley/Polanco platoon at mid-season and sent Polanco to the Tigers. Actually, the move was fortunate for Utley, the Phils, Polanco, and the Tigers. Utley was nothing short of fantastic in his first full season - 28 HR, 105 RBI, 16/19 SB, 93 runs, 39 doubles, 291/376/540 in 147 games. He is 27 this season, and looks to improve on his numbers. Near the top in the league in plus/minus, but not fantastic at turning the double play.

Strangely, David Bell has morphed from a semi-offensive minded third baseman into a defense first light hitting third baseman. Odd, that. Bell ranked first in the majors in plus/minus, and 11th in bunt percentage, while finishing above average in range factor. Still, the Phillies would like Bell to score more than 53 runs in 150 games, hit higher than .248, and improve upon his 671 OPS, a career full season low.

Rollins is a good example of the Fielding Bible proving range factors wrong, or at least supplementing what range factors tell us. Rollins finished well below league average in range factor, but fourth in the league in plus/minus last season. Rollins is better than his range factor makes him look. On offense, Rollins defies traditional OPS analysis in a similar manner - his OPS was below league average last season, but looking at OPS clouds the fact that Rollins was very good last season. For the second year in a row, he scored 115 or more runs, had 190 hits, and 11 triples, while also stealing 41 out of 47 bases. Additionally, Rollins hit a career high .290 and struck out a career low 71 times. On both sides of the ball, Rollins is truly an underrated player.

Exit underrated Jason Michaels, enter underrated Aaron Rowand. Having Rowand patrol centerfield will only help the Phillies pitching staff, and playing for Philly should only help Rowand return to his 2004 form after a down year offensively in 2005.

Bobby Abreu is a perfect example of why guys don't like to participate in the homerun derby at the All Star Break. He torched the competition, and then suffered through a mediocre second half of the season. Abreu is still a very good rightfielder offensively, and should rebound this year despite the fact that he is 32 years old.

Pat Burrell had a career year in 2002, and has been progressively trying to get back to that form ever since. Last season was a good one - 99 walks, 117 RBI, .389 OBP were all career highs. Still strikes out too much, doesn't score a lot of runs, doesn't run well, isn't very good on defense. Not the type of guy you complain about, but not going to be on anyone's top ten lists.

To the extent that consistency is important in a pitching staff, the Phillies have an advantage. The Phils front three, at least until Randy Wolf returns from injury, are the same as last year, and averaged over 200 innings each. They are the good, the bad, and the ugly. The face of the Phillies rotation is Jon Lieber, the durable veteran who doesn't make a lot of mistakes but doesn't dominate anybody either. Brett Myers is the exciting youngster - at 24 years old last season, he struck out nearly a batter per inning while leading the staff in ERA. Lidle is the crafty veteran - doesn't over power, but doesn't walk many guys and managed to give up only 18 homeruns in 184.2 innings, far fewer than the 30 plus that Lieber and Myers gave up. These guys are solid, not great, but give the Phillies a chance to win if their offense produces as expected.

The back end of the rotation has some exciting potential. Unfortunately, the Phillies acquired, and appear to be committed to, Ryan Franklin. This is a guy who gave up tons of homeruns playing for Seattle, in a pitcher's park. Now he joins the Phils, where he should easily be able to give up 30 homeruns by the All Star Break.

Floyd and Tejeda both have stuff. Good stuff. Unfortunately, both youngsters walk way too many batters per inning. If either of them, or both for that matter, can cut down on the bad pitches, they should be lethal, and could provide a major boost to the rotation.

The acquisitions of Gordon and Rhodes were excellent moves - too bad they came at the same time that Billy Wagner was headed off to New York. While both guys pitched well last season, Gordon is five years removed from his last season as a closer, and Rhodes has never been a closer. These guys are 7th and 8th innings guys, and the failure to acquire an actual closer may be a difference maker for the Phillies in 2006.

The Phillies are a good team. They will win a lot of games, and if the Mets and Braves falter, they may be able to make a run at the division title. Their pitching is really not strong enough to carry them very far, despite the help their defense will provide, and they will probably need to make a move or two in order to make a serious run.


Disagree with something? Got something to add? Wanna bring up something totally new? Asher B. Chancey resides in Alexandria, Virginia, and can be reached at asher@baseballevolution.com.