News and Notes from
Around the League 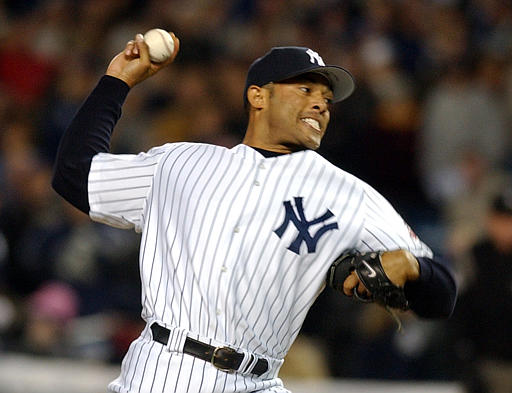 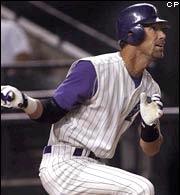 Is Game Seven of the 2001 World Series the best game of all time? It's up there, but one things for sure: it makes a heck of a skeleton to write a book around. Charles Euchner has done just that with The Last Nine Innings, using that game as a vehicle for exploring the many facets of modern baseball. Keith explains further in his full review.

Speaking of the 2001 World Series, Series co-MVP Randy Johnson takes the mound for the Series loser New York Yankees today as their Opening Day starter. While Johnson is almost certainly a lock for the Hall of Fame, Asher explores other questions that linger as Johnson heads into his 19th season. 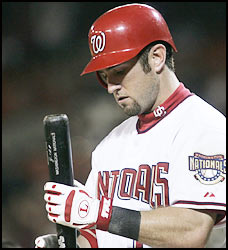 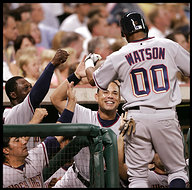 In a relatively shocking move, at least for those who live inside the Beltway, the Nationals optioned Ryan Church to New Orleans and announced that Brandon Watson will be the starting centerfielder and leadoff hitter for Washington to start the season. Asher, kind of wishing he could get optioned back to New Orleans, writes that this could be a good move for the Nats, while Scott is pretty certain that Asher is being a bit optimistic. 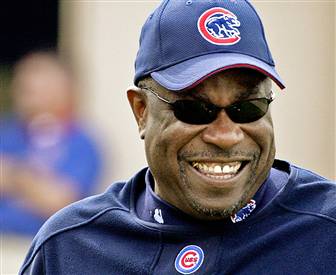 It is really too bad that Dusty Baker is not a sportswriter, because if he was he would easily be the Bonehead Sportswriter of the Month. When asked recently about Jerome Williams and Glendon Rusch's struggles in Spring Training, Baker shook off any such concerns while offering this sage advice -

"They've pitched well in the past, so why wouldn't they pitch well in the present and future? I'm not too worried."

Yeah, that makes tons of sense.

Alfonso Soriano was conspicuously absent from the Nationals' starting lineup on Monday. So conspicuously, in fact, that the Nationals only had eight guys on the field and Manager Frank Robinson had to change the lineup before a single pitch had been thrown, as Soriano refused to take the field as the club's new left fielder. As Asher writes in the debut of the second season of the D.C. Daily Diary, the Nationals are taking a hardline, and should be applauded.

The trouble is, both Arroyo and Williams are flyball pitchers, and according to Hardball Times Baseball Annual 2006, the Great American Ballpark's has allowed 11% more home runs per flyball than the average stadium in its three years of existence. In fact, every member of the Reds' projected five man rotation was among the 20 most extreme flyball pitchers in the Majors last season!!!

Truly, this is a poorly-run franchise. Last season, Dustan Mohr of the Colorado Rockies struck out 94 times in 266 at bats, or once every 2.83 at bats. For context, that's a worse rate than Adam Dunn whiffed at when he broke the single season strikeout record two years ago (195/568 - 2.91).

In The Hardball Times Baseball Annual 2006, Dave Studenmund provides component park factors, meaning how much each ballpark inflates or deflates ground balls, line drives, outfield flies, and strikeouts, averaged over the past four seasons. He found that probably due to thin atmosphere and a good hitting background, Coors Field has deflated strikeouts by 12% over the past four year. In contrast, Dolphins Stadium has increased K's by 12% over the league average during this timeframe, undoubtedly due to humidity and poor sight lines.

This means that we can park adjust Mohr's strikeouts per at bat to 2.67 in a neutral setting, or to 2.52 in Dolphins Stadium. Let's look at the results over 600 at bats:

Purchase The Hardball Times Baseball Annual 2006 for just $13.95 at The Baseball Evolution Store. 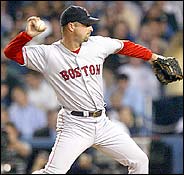 Doubtless, that's a high hit total, but not as high as Voros McCracken might have predicted. McCracken, as you remember, pioneered the idea that pitchers have little or no control over whether balls put in play become hits. Rueter allowed over 6,400 balls to be put into the field of play during his career; batters hit .292 in those instances, and Rueter has a career .586 winning percentage.

Shawn Estes pitched for many of the same Giants teams, but batters hit .313 against him on BIP, and he has just a .527 W%. Jason Schmidt has been Woody's teammate for the past four and a half years, and is generally regarded as a more effective pitcher, yet yeilds a BIP% of .297, and has a Win% just three points higher than Rueter's.

Of course, Kirk's specialty was holding runners. He didn't throw hard, but only 34 bases were stolen off of him in 13 years, whereas 65 runners got caught stealing while he was on the mound (34.3% success). In contrast, 35 runners stole safely against knuckleballer Tim Wakefield in 1999 alone, with only six being thrown out (85.4%).

The Cooperstown Hall of Fame held a Special Election in which 39 previously overlooked Negro League players had a second chance at enshrinement. A brain-boggling 17 players got the 75% vote needed... but somehow, Minnie Minoso was not among them!


In an article concerning the Special Hall of Fame Ballot, ESPN.com's Rob Neyer wote the following:

To which I replied, "Stan Hack wasn't white?"

Neyer owned up to this oversight in a later email, so we forgive him here at Baseball Evolution, even though we are the biggest Stan Hack supporters outside of his kin. Yet to make certain that no one forgets, we've crowned Rob as a Co-Boneheaded Sportswriter for February. 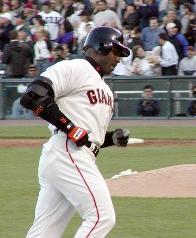 Barry Bonds had targeted losing 10-15 pounds this offseason in order decrease pressure on his no-cartilage knee. He's only lost about five so far. “I'm just not a skinny person, dude, I'm not," claims Barry. "I never will be.”

See why Asher thinks Alfonso Soriano has more to worry about than being skinny in 2006.

Well, this is truly the end of an era. For one thing, when Frank Thomas first steps up to bat as an Oakland Athletic, his name comes down off of the list of one-teamers. More importantly, Frank Thomas, perhaps the greatest player in the history of the Chicago White Sox, is headed out, moving on to Oakland ostensibly to finish his career.

This move is a good. It makes good sense. Thomas is a prototype Oakland player (big, powerful, walks a lot, slow), and this could be a steal for the low-budget A's. Wouldn't it be great if the Big Hurt is the Big Healthy next season? 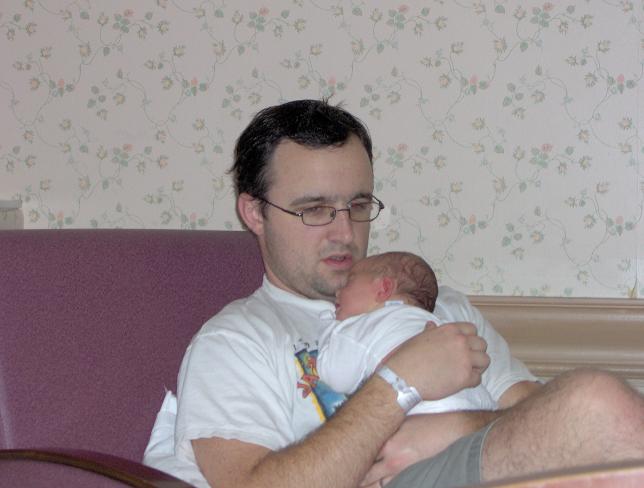 2:00pm - Bruce Sutter, but not Andre Dawson, is elected to the Hall of Fame
2:15pm - Lillian (Lily) Louise Chancey is born in Washington D.C.

8 pounds even; Mother and baby are doing very well, and father is very happy.


Hear the staff of Baseball Evolution react to the Corey Patterson trade, then find out why Asher feels melancholy about the whole deal.

There are still some quality free agents available, including Jeff Weaver, Frank Thomas, Mike Piazza, Erubiel Durazo, and Matt Mantei. But as you can tell, they're all mostly pitchers and DH-types, causing teams to scrape the bottom of the barrell for their other needs.

Cubs - Signed Marquis Grissom to a Minor League Contract - If you had told me back in 1991 that the Cubs would have had both Marquis Grissom and Delino DeShields on their team at some point, I'd have gotten pretty excited. Now, not.

Red Sox - Signed JT Snow to a 1-year, $2M deal - Who would have thought that there would be a team out there with lower offensive standards for a first baseman than the San Francisco Giants?

Phillies - Signed Ryan Franklin to a 1-year, $2.6M deal - Let's see, a pitcher who averages over 30 home runs allowed per season at Safeco field moves to one of the more prolific home run parks around. I get the feeling that Philadelphia misses Eric Milton.

See News and Notes from the first three months of 2005.